Of Back Hair and Body Image 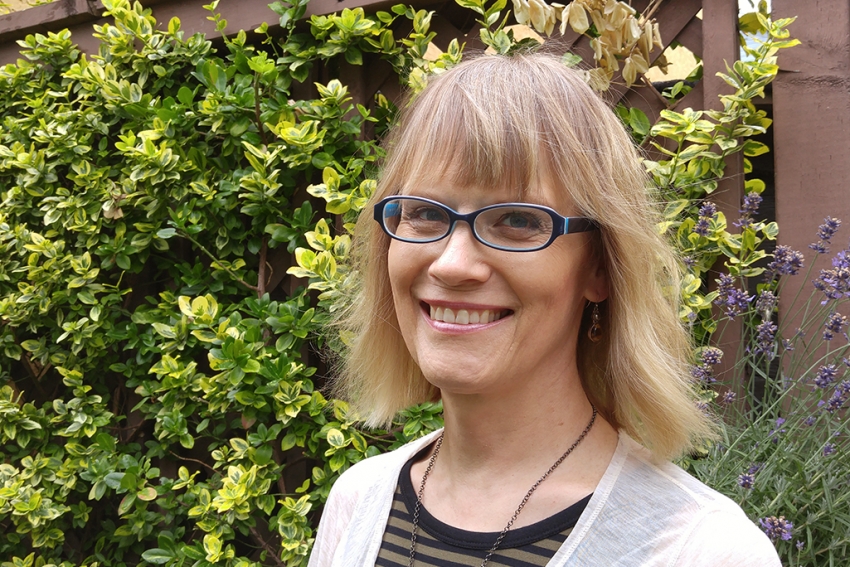 Note from the author: Trans people’s lives are incredibly diverse, and our ways of understanding our experiences vary considerably. This article is based on my personal story, and should not be viewed as “typical” of trans experience.

It is August 2013, and I am standing in front of a fitting room mirror in tears. I had just looked over my shoulder at my back, wanting to know how much hair would have to be shaved off before I could wear the dress I was trying on.

But my back looked smooth. After a few months of hormone therapy, my back hair was a light fuzz, like the back hair of many other women, and the tears that came when I realized this were tears of relief and gratitude.

This may seem like a small thing, but after years of removing hair from all over my body (and I mean all over: back, legs, arms, chest, bum, stomach, hands, feet and anywhere else you can think of), it was a huge thing to me in that moment, and remains one of the things I am most grateful for in my gender transition.

Born in the wrong body?

One problem with the concept of being “born in the wrong body” is that it lets us be seen only as victims of a biological mistake. It leaves little opportunity to celebrate our bodies or to allow transgender bodies to be seen—by the world and ourselves—as inherently healthy and beautiful.

Personally, I would never say that I was born in the wrong body. Things about my body caused me distress (like its hairiness), but my body wasn’t “wrong.” The changes I have made to my body during my gender transition have come about as part of a journey of discovery and self-emergence rather than from a sense that I was “fixing” wrongness.

For example, I was nervous before I started hormone replacement therapy (HRT); I wondered if I should do this “to” my body. However, after a couple months of HRT, I realized that transition was something my body and I were doing together. I wasn’t changing my “wrong” body to match my gender. Rather, my body and my gender were growing and changing in relation to each other.

Why did I need to change my body at all? The answer to that question is complicated, but I’ll try to explain at least part of what led me to these changes.

My discomfort with my birth-assigned gender goes back to my childhood, when I wondered about what it was like to be a girl and sometimes had daydreams about turning into a girl. I never spoke to anyone about this, and was actively suppressing these thoughts by my early teens. But they were always there, sometimes very insistently so.

In my thirties, I came to the conclusion that I wasn’t a man, but I probably wasn’t a woman either, even though I felt much closer to women than men. The one emotion I could be guaranteed feeling every day was envy of women...of their friendships, their lives, their clothes, and aspects of their bodies. And while women certainly accepted me as a friend, I never felt as if I belonged with them.

In my mid-40s, the depression I had been diagnosed with years earlier stopped responding to medication. I found it more difficult to control my alcohol consumption, and I had increasingly intrusive suicidal thoughts. Finally, after a drinking binge I was lucky to survive, I knew something had to change.

Several months of counselling made me start to seriously consider HRT. When a friend confided that they had started HRT, not because they were going to transition but simply as a way of emotionally stabilizing their own gender struggles, I thought, “Why shouldn’t I try that?”

By January of 2013, I had the pills in hand. I was nervous about taking them, but I remembered something that both my psychologist and endocrinologist had said: Just because I had the pills didn’t mean I had to take them. If I didn’t like them, or they weren’t helpful, I could stop.

When I began taking them, I wasn’t planning to transition to be a woman. Like my friend, I just wanted to feel more comfortable within myself.

It didn’t take me long to realize that the hormones were exactly the right choice. For one thing, my depression disappeared as my body chemistry changed. So did symptoms of obsessive-compulsive disorder that I had experienced since I was a teenager, and anxiety I hadn’t even realized I was carrying until I woke up one morning completely at peace. This was a brand new feeling for me.

My body becomes my body

As my body changed and people’s perceptions of me changed, so did my understanding of myself and my identity. Hormone replacement therapy seemed to loosen the constraints I had placed on the “feminine” part of my identity—now I was able to acknowledge and embrace it, growing into it emotionally, psychologically and physically.

I was surprised to find I really liked the physical changes, the most obvious of which was breast growth. My breasts seemed completely consistent with who I was and who I was becoming. Soon I couldn’t imagine my body without them.

Most importantly, I realized that my body finally belonged to me. Up to that point, my body had belonged to society—a society that told me that because I had this particular body, I was a man. Now I was controlling my body, shaping it in a way that felt natural to me. It had become my body, and I could interpret it any way I wanted.

Increasingly, people were seeing me as a woman. Strangers started to refer to me in female terms, and some of my friends started thinking of me that way as well. Being called a man had made me feel invisible, but being called a woman made me feel seen and recognized. The one had felt uncomfortable (the social category was wrong), but the other felt comfortable (the social category seemed right, and I was glad to be placed in it). Most of all, being thought of and talked about as female made me deeply happy, which is what finally led me to know I was a woman.

So, what happens now when I look in the mirror? For one, I’m still grateful for the changes in body hair. Also, when I scrutinize my body as a whole, I often like what I see. My body is a bit curvier than before, with a better-defined waist and slightly fleshier hips and bum. When I’m wearing makeup, I like my face—although I think I could do with fuller lips.

But while the hormones have done a lot, they have their limits. My body can still look pretty blocky to me. I worry that my breasts—much as I love them—are too small. Also, male puberty gave me a comparatively large rib cage, and I feel insecure about that. And when I’m not wearing makeup, I worry that my face looks too masculine.

Additionally, I recently turned 50, and my body is aging. I wonder—sometimes painfully—what it would have been like to have a young woman’s body. No matter what I do, I will never get to be a young woman.

When I start criticizing my body, however, I remember an article I once read. The trans author mentions that early in her transition she told her girlfriend that she couldn’t wait to look in the mirror and like what she saw. Her girlfriend replied, “You realize that’s never going to happen, right?… You’re going to look at your reflection and feel unsatisfied—just like every other woman.”1

I like this reminder that any dissatisfaction I have with my body arises less because it’s a trans body and more because I live in a culture that teaches all women, cisgender and transgender, that our bodies are never good enough. It’s strangely comforting to know that I have this in common with so many other women, even though I wish none of us felt this way.

Born in the right body

Someone recently asked me how old I was when I knew I was in the “wrong body.” The question started me thinking:

I like being a transgender woman. To be trans is a gift that few people experience. My trans self has always been a part of me. I don’t know what it would be like to be anyone else, nor do I want to be anyone else. If I had been born with a body and gender that “matched,” I wouldn’t have been trans—and therefore I wouldn’t be me.

This means that, even when I’m dissatisfied with it, my body is (and always has been) exactly the right body.

Mary Ann is a transgender woman who lives in Vancouver, BC. She teaches literature and academic writing at the University of British Columbia, often with a focus on transgender topics. She is passionate about educating others about trans people and trans lives