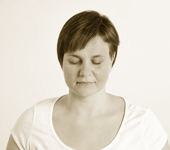 I used to count the hours before the next time I’d be expected to eat. The farther away that moment was, the calmer and more in control I felt. When mealtime came, I’d do everything I could to avoid eating, and when it was over, the countdown would begin again. I survived on a few pieces of toast and what my mother carefully watched me put in my mouth—and shrunk to 102 pounds on a 5 ft. 8 in. frame.

I was anorexic. I didn’t realize this at the time: I didn’t frame my relationship with my body that way in my head. Anorexia, I thought, was when people didn’t eat because they wanted to be thin like the models in the magazines. Sure, I wanted to look like those impossible women, but you don’t battle hunger, one of your most basic survival instincts, to the point of endangering your health and life, if it’s just about fitting into a pair of skinny jeans.

Anorexia is about control. As a young teenager about to start high school, the world was a very scary place, and my body was at the centre of it all. Bodies are how people judge you. Bodies are what men on the street are looking at when they catcall you. Bodies feel things. If I could get the confusing ‘animal’ of my body quiet and under control, I thought, then I could handle this world. If I stopped feeding the animal, maybe it would go away.

Taming the animal of my body

More than 15 years later, I survived not only to tell the tale, but to teach yoga, a profession that speaks directly to the experience and care of the body. While yoga can be many things to many people, for me it’s been a practice of cultivating and healing the thorny relationship between my mind and my body.

These two aspects of myself—mind and body—used to be mortal enemies (literally, really). Now I think of them as two different but interconnected intelligences that make up who I am. The mind is a place for thought, deliberation, comparison to past experiences, and planning for the future. The body is that which experiences the world, that feels and reacts in the moment.

It’s no wonder that I targeted my gut and fat layer in my war against my body. The gut has its own set of neurons and sends signals through the spinal cord up to the brain. The fat layer just under your skin secretes hormones that communicate with the nervous system.

I didn’t want the scary world inside me: the less I put in my mouth, the less information my gut and my shrinking fat layer would have. By not eating, I was trying to cut the lines of communication between my body, which experiences the world, and my mind, which acknowledges my existence in that world. Anorexia, like many addictions, can be a strategy for going numb.

Beating your body into submission through starvation, however, hardly makes you into a calm and rational machine. Just as the body can sometimes overreact with fear and anxiety when it doesn’t have all the information, the mind can just as easily spiral into nonsense that sounds like logic but really isn’t.

The body and the mind need to converse with each other in order for us to have a complete experience of the world and to respond to it appropriately.

Yoga and me: feeling it all

Yoga is often sold as a tool for feeling happier and more positive all the time. That’s only partly true. As you spend time in yoga practice experiencing your body and listening to it, you can more easily access calm, contentment and happiness. But if you are willing to be present to those emotions, you’ll also encounter fear, shame and regret. You can’t selectively unfreeze your emotions—if you’re going to feel at all, you have to feel it all.

Yoga, at its best, helps us access the intelligence of our bodies and gives us tools for experiencing both positive and negative emotions. The simple but profound secret, for me, has been about being willing to feel, and then having permission and compassion for whatever I feel without trying to fix or change it.

This practice is not always easy, but it can give us the gift of a richer experience of our own lives. I wouldn’t trade that for the world. Or for my beautiful fat layer—I worked hard for that thing!

Julie (JC) is a yoga teacher and a writer. She has an MA in English, serves as president of the Vancouver Poetry House board, and writes a biweekly yoga column for Spirituality & Health magazine. She owns Ocean and Crow Yoga in Vancouver with her mom, Jane. Learn more at www.jcpeters.ca