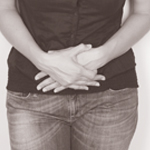 There are many misconceptions about anorexia, an eating disorder characterized by severe food restriction, irrational fear of weight gain, and a distorted self-image. It is often linked with models in the fashion industry, and thus is often seen as a glamorous affliction, even though it has many uncomfortable symptoms and a high mortality rate.

Let me bust that myth right now—there is nothing glamorous about ice-cold hands and feet, head rush, fatigue, panic attacks, an embarrassing but inescapable preoccupation with food, and killer stomach aches, 365 days of the year.

Even less glamorous are the blood tests, ECGs, doctor and psychiatrist appointments, therapy sessions and dietary consultant appointments. In any given week I get stabbed, fondled, analyzed, treated and monitored.

Some of the physical symptoms are fairly manageable—it’s easy to put on a sweater (or four) to keep warm, or remember to not cross your legs to avoid a dead leg. But it’s impossible to escape from your own thoughts. Anorexia is a mental disorder that is completely ruled, regulated and encouraged by the mind.

The mental aspect of eating disorders is completely devoid of logic. I ferociously believe there is no one ‘perfect’ body type and think everyone has beauty and value if you look for it. But I cannot for the life of me apply my own ideology to myself. Perfectionists like me need an ideal to compare themselves to, and even though obesity has run rampant through North America over the past decade, the “skinny girl” is still the one put on a pedestal.

I hate the word skinny, but that doesn’t stop me from compulsively pursuing skinniness. Did you know that skinny means “to be lacking flesh”? This has a very negative connotation—think war prisoners during the Second World War—yet so many people I know, both male and female, actively pursue skinniness.

When it all started

I have a theory that halfway through grade 11 everyone loses their minds. That’s when school gets 200% more stressful: there’s a heavy emphasis on getting good grades and being involved in extracurricular activities, all in  preparation for university and graduation transition. Stress makes people do things that feel rational, but objectively are not.

And that’s when I realized I literally hated everything about myself and I wanted to make a change. I tortured myself mercilessly, comparing myself to everyone around me: friends, strangers, models, celebrities. I didn’t want to be my average self (average weight, average height, brown hair, brown eyes, fair skin) for a second longer.

I self-harmed for the first time, tying bloody reminders like bows on my fingers with a blade. The reminders worked—I began to eat very healthily and exercise almost daily. April 2012 was the last time that I took a blade to my skin, because I didn’t need reminders anymore.

I had trained myself to do more and eat less. By the summer of that year, I was the strongest and fittest I had ever been in my life. The problem was that I didn’t know when to stop the process of restricting my food intake.

In the summer of 2012 I went to Quebec to do a five-week French immersion program. We lived in dorms and ate in a cafeteria. The food was very unappetizing—bland, watery and overcooked. The vegetarian options were slightly less vomit-inducing (yes, I actually puked on my first morning there). Encouraged by a new friend, I became a vegetarian—the first step toward cutting things (meat) out of my diet. I ate three smaller-than-‘normal’ meals a day only, and wouldn’t snack on anything, even though all of my friends did.

One day, feeling uninspired by tasteless chunks of tofu and under-seasoned vegetables, I skipped a meal for the first time. It felt like I had accomplished something, like when I pushed myself harder when going for a run.

Limiting myself became an easy practice that only got easier when I returned to BC and faced compliments (which I refused to accept because of my distorted self-perception) and the ‘death’ of the summer season. BC weather is grisly at best in winter; it’s like the sun disappears for six months and takes everyone’s will to live with it. Discontent and seasonal sadness made it even easier for me to be cruel to myself.

I started grade 12 that fall and was feeling the pressure. By some godly stroke of luck I had achieved straight As in my grade 11 year, and I was hell-bent on doing the same in grade 12. Stress became my ‘best friend.’ Not the kind of best friend you have cute inside jokes with and who loves you unconditionally, but the kind that calls you rude names and steals your love interest.

Even though I had already lost about 25 pounds, I still hated the way I looked. The psychobabble in my head kept getting louder, and my diet even more restricted. I existed mostly on coffee and salad. I kept thinking, “I’ve come this far. I can lose five more pounds.” Slowly, without noticing, things slipped out of my control...and then I was stuck.

At Christmastime, when my mother and I went to visit her family in Australia, I had to acknowledge that something was wrong with my circulation. I was cold, in Australia, during their summer—if that’s not a warning sign, I don’t know what is.

I was so plagued by mental and physical pain that I couldn’t fully enjoy Australia, even though it’s my favourite place on this planet. That’s what anorexia does to you. It takes the enjoyment out of life. It makes you apathetic, tired and melancholy.

By the time we got home in January, I was getting really sick. I was convinced I’d gained weight during my absence, but the ever-blunt scale actually revealed I’d lost seven pounds. Comments on my physique became more common—one friend cried when I took off my shirt so I could show her my grad dress. I guess seeing all my ribs so harshly was too much for her to handle. By March my body looked like a warped mix between a seven-year-old and a 70-year-old.

I no longer cared about anything but my grades and staying thin. My life became unbearably monotonous. I wanted to disappear without anyone noticing, and to never be conscious again. I wanted to starve myself into oblivion.

The worst day ever

On Easter Sunday 2013, I remember sitting on the edge of a hot tub, willing myself not to pass out. I had never felt that physically weak. It was like being in one of those nightmares where you’re trying to run from a monster, but you can’t make your legs move no matter how hard you wish you could.

I’d had an ECG earlier that month, and my heart rate was somewhere around 45 beats per minute; the minimum rate for someone in good health is 60. I couldn’t even sit without bruising my seat bones. I had a hard time sleeping because my knees dug into each other and pinched nerves. Going numb every time I crossed my legs made it awkward to wear skirts, which made me sad because I love skirts.

My mother is a smart woman who works in health care, so I’d be a fool to believe she didn’t realize what was happening long before “The Worst Day.” She did confront me about it a few weeks before, but hadn’t forced the conversation sooner because she believed I wouldn’t have accepted help. She was right. Every show of concern or cathartic conversation made me feel guilty. It was like I had to make myself even sicker before I could accept help.

Really, the only thing you can do for someone in this situation is to offer support. Understand that however hard it may be for you to watch them self-destruct, it’s nothing compared to how much every cell in their body aches.

You can’t save us. You can be there for encouragement and comfort, but you have to wait for us to figure out that we’re ready for change; it’s not something you can force on someone else. We can only save ourselves.

I’m extremely lucky, because I had friends and family who understood that. My mum knew that I had to hit rock bottom—The Worst Day—to really accept that change was not an ‘option.’ It was a necessity if I wanted to live to see my dreams of university realized.

Learning how to live anew

My mum put together a wonderful support team comprised of a doctor (to monitor physical health), a therapist (to help me unravel my emotions), a dietitian (to coach me on how to reintroduce proper nutrition into my life) and a psychiatrist (who ran the whole show).

I’m now learning how to live again—in baby steps. I was able to finish my grade 12 year, and I’m allowed to exercise now.

I’m relatively sure, however, that I will be in recovery for the rest of my life. I feel like violently shaking the people who say things like “Well, why don’t you just eat?” Thank you for that brilliant insight. Why don’t you try curing cancer next? It’s so much more complicated than that.

If there’s one good thing I could pick out of the awfulness, it would be the realization that I can literally do anything I set my mind to. I brought myself very close to death and still survived. While it’s a sick kind of learning and something you can’t unlearn, it has shown me how powerful my sense of determination can be, if I apply it in appropriate settings and ways.

Knowledge may be power, but power has to be used responsibly. There’s nothing inherently wrong with wanting things, but there is something wrong, I think, with constantly wanting other people’s approval. We spend so much time begging for approval and looking for justification that we don’t put effort into loving ourselves. Is that any way to live? Is that even living, or is it just being alive? Please, I implore you, choose Love and Life.

Sophie is 18 and has lived in Yellowpoint (on Vancouver Island) all her life. She will study writing at the University of Victoria for a year, then plans on moving to Australia to pursue fashion journalism. Sophie is a perfectionist, worships coffee and finds people and old cities enthralling