Drugs have the potential to both help and harm

When people use drugs, they are manipulating the pleasure and reward system in their brain to achieve some benefit, or at least a perceived benefit. (Our brains are wired to associate life-sustaining activities—eating, sleeping,sex—with pleasure or reward. Drugs tap into that wiring and modify our feelings of pleasure, as well as our movement, emotion, thinking and motivation.)

Some drugs can have two to 10 times the impact of natural behaviours in triggering our pleasure and reward centre. This intense response encourages repeated use of a drug. Unfortunately, repeated use—especially in high doses—is often associated with significant harm.

Some harms relate to using too much of a drug at one time, and tend to be immediate (e.g., injury or death as a result of being drunk or high when driving or doing other activities that require concentration, balance and good judgment).

Other harms relate to chronic conditions (e.g., heart disease and cancer) that emerge from longer-term use. These vary depending on characteristics of the drug itself or the way they are used. So, for example, much of the chronic harm related to tobacco is not from the drug (nicotine) but from inhaling smoke over a long time.

If the brain is repeatedly exposed to a drug, it may go through changes in order to restore balance. But these changes may have other consequences as well. The brain may not respond as well to certain stimuli, so that natural sources of reward no longer provide any significant pleasure and the person begins to feel flat, lifeless and depressed. As a result, they need to take drugs just to feel normal, and sometimes they need to take larger and larger amounts.

These changes within the brain can lead to problems with thinking, talking and moving around. They can also lead to strong associations between certain things and/or feelings and the drug experience. Exposure to those things and/or feelings can later trigger powerful cravings for the drug. When a person’s drug use has gotten to this stage, it becomes more difficult to make effective changes.

Peter Gzowski on smoking:
“And what with constantly trying to figure out where you could go and when, depending on whether you could smoke or not, it was becoming more trouble than it was worth. It was, not to put too fine a point on it, a pain in the ass.”
—How to Quit Smoking in Fifty Years or Less

Sometimes it’s hard to understand the “good, bad and ugly” sides of your use of alcohol and/or other drugs unless you write out the pros and cons (positive things and negative things) of each side. 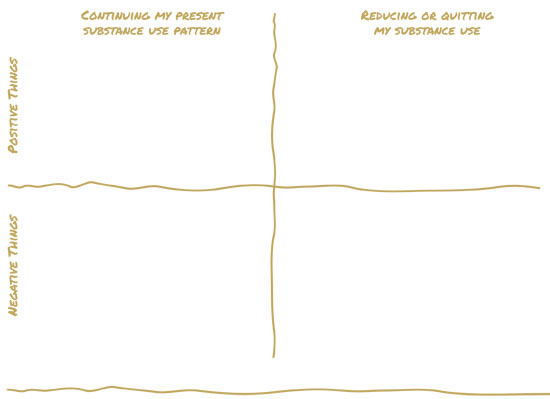 Experimentation versus problem drug use

Nobody starts at the end. Nobody just starts smoking a pack of cigarettes a day. Or begins packing back a six-pack of beer in one go. Or makes the use of a substance a regular habit right away.

Despite stories in the media and drug education classes about people “getting hooked” on crack or crystal meth after using it just one time, most people use a drug many times before becoming physically or psychologically dependent on it. Yes, a person may like how a drug made them feel the first time they used it and then choose to use it again. But that’s not the same thing as being dependent or addicted.

Most of the time, people experiment with a substance for the heck of it, or because they heard it could help them in some way. They don’t necessarily mean for it to become part of their lifestyle. But it can happen anyway for a variety of environmental, social and individual reasons. For example, a person struggling to cope with a history of sexual abuse or being bullied might self-medicate with alcohol for much longer than is helpful. Similarly, a person with a health condition can accidentally develop a problem with prescription drugs, including painkillers and sleeping pills, after using them for too long.