The Gift of Screens 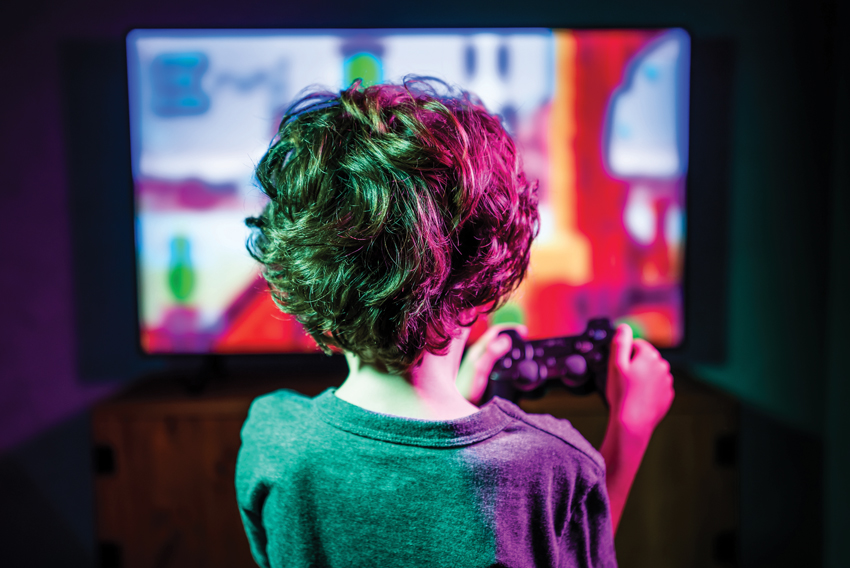 “If it’s a question of letting him play video games or coming to the ER—let him play video games.” This was the advice the psychiatrist gave us in our exit interview after our nine-year-old son spent the weekend in the Children and Adolescent Psychiatric Emergency (CAPE) unit at BC Children’s Hospital.

Sleep has never come easily for our son, which has drastically limited his resources for coping with life’s challenges. On top of insomnia, he’s autistic, lives with ADHD and is gifted. He is also deeply empathetic and brilliant, with a huge heart. My relationship with him has taught me so much about myself.

Even as new parents, my partner and I were aware that magazines and websites devoted to parenting had a clear message about screen time: good parents keep their kids outside, inspired, engaged; lazy parents let their kids use screens. Screen time is to be used as currency and kept super rare so it can motivate or punish kids.

Once, when he was two, we tried taking away screen time as a consequence. It went like this: Me/my partner: “If you don’t come right now, you can’t watch TV at all this afternoon.”My son: “I am never watching TV again.”He kept his word until two months later when we finally needed a break from his constant attention and plunked him down in front of the TV.

Our son has laser beam–like focus. He’s what our psychologist has described as an “extremely high-need child.” He could never comfortably play by himself. He was no more than four when his gifted brain developed an awareness of mortality. He realized that things and people could go away and never come back. He needed constant reassurance that we were there. He craved attention. If he was drawing pictures, he needed us to comment on what he was drawing. Even watching TV he would frequently look back at us, studying our faces for reactions to what was happening onscreen. It was gratifying to be so connected to our child, but it was also exhausting.

The same year he started school, we had a second child. These two events heightened his anxiety to an extreme degree. He couldn’t be alone, but he couldn’t be in the same room as his infant sister because of the sensory overwhelm of autism. He was in a constant state of panic and desperation. We had a newborn, whom we adored, and this exceptional boy who was trying his hardest to be OK. We were desperate to take care of everybody and relied heavily on our family for support.

When our son discovered video games it was a revelation for us all. Here was a challenge for his big brain: puzzles, riddles, exercises for his hand-eye coordination. Games provided real-time feedback. They gave him something to succeed at, which soothed his perfectionism. Gaming could be stressful, too, but it gave him a way of briefly putting aside the anxiety that plagued him.

We knew there was a chance he would use screens compulsively, and we had conflicted reactions to his new passion. Obviously, we didn’t want him to lose his connection to the world, becoming a screen zombie who didn’t want to do anything but plug in. But we could see how it quieted his spirit, how his body just seemed to relax in a way that didn’t happen out “in the world.” Other than turning screens off two hours before bedtime, our limits became looser and looser.

The spring he turned nine, as the days got longer, he stopped sleeping. He seemed to live in the extremes of self-loathing and rage. He tried to get out of our moving car. He attacked us. He tried running into traffic. It was devastating, and we wondered if our precious boy would ever rest again. We were sleep deprived too, sleeping in shifts. We were stuck trying to keep our family safe from his volatility and trying not to blame ourselves for his condition—trying, too, to allow his sister to grow up feeling safe and to leave room for a good sibling connection later.

And we found ourselves at the place that our culture had warned us about: video games to the exclusion of all else. Where he had once loved drawing, making up stories and moving his body, now he only wanted to play his games. Sometimes we felt we had let him down by letting him have so much time with the screen. But the reaction when we had to separate him from his device was painful and dangerous for all of us.

Taking the pressure off

After multiple trips to the ER at BC Children’s, we realized that he needed help we couldn’t provide at home and admitted him to the CAPE unit. It was a hard decision, but thankfully our FamilySmart peer support worker helped us stay in the mindset that this was best for him.¹ It wasn’t an easy weekend, but we did get a couple of nights of unbroken sleep. As we prepared to leave, we met with the psychiatrist on call.

We confided our secret shame: we were letting our son play video games whenever he wanted. Should we regulate his screen time? How do we handle the fallout? It’s a fight every time. We have to physically tear it away from him, and he rages and attacks until we are genuinely worried for our safety.

The doctor’s reaction was unexpected: “If it’s a question of letting him play video games or coming to the ER—let him play video games.” He reassured us that we were doing all we could. Our son was taking the best medicine available. All we could do was wait. No progress could be made until his nervous system started to settle. “At that point, you may find that he puts the screen down himself. But either way, be gentle with yourselves. Your whole family has to get through this in one piece. He’s safe, he’s home, let him feel OK, and let yourselves rest too.”

We have been so grateful for that advice. Removing that battle from our relationship with our son left us room for connection. As predicted, he did start to feel better, and he did move away from constant gaming. When life is stressful, he sometimes retreats back into the digital world, but we take solace in the fact that he will emerge again, and that his ability to soothe himself is a wonderful gift.

Malcolm is a full-time dad, a peer support worker for parents and caregivers whose kids are experiencing mental health challenges, and a writer and illustrator of comics for exceptional kids. He lives in Coquitlam