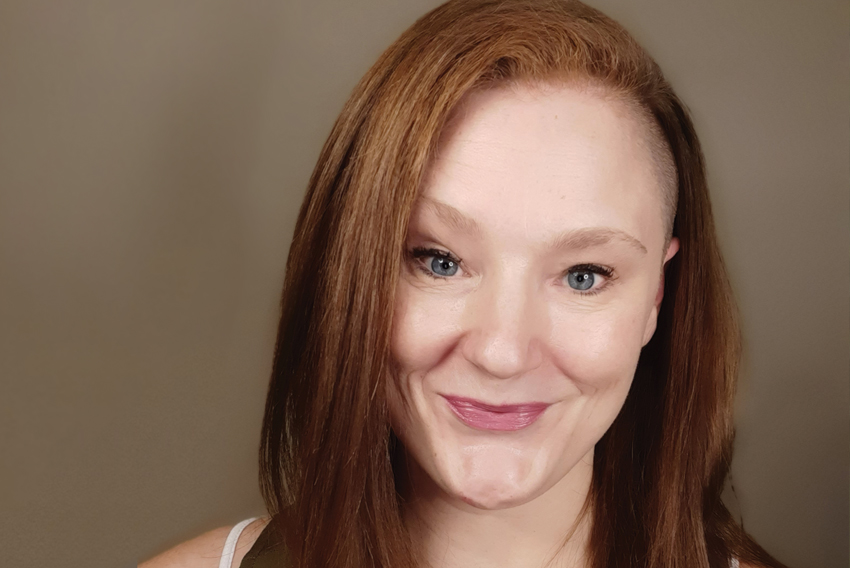 My thoughts about feelings are constantly evolving. I didn’t grow up like other kids I’ve known. My father was one of the first Indigenous men in Saskatchewan to gain full custody of an infant daughter—me. He was about 20 years old. My hero, then and now.

He worked multiple jobs to provide for me. If he didn’t have a babysitter, I would go to work with him. I have memories of sleeping in his work truck during the day, sleeping in the manager’s office at the bar in the evening. Apparently, I instinctively knew Dad had to work, and I didn’t fuss much. I always had my McDonald’s Happy Meal and books to read or colour in.

At home, when my father needed rest, he would turn on cartoons and curl up on the sofa, me tucked behind his knees. Again, I didn’t fuss. I knew Dad had to sleep. I have a faint memory of watching him, eyes closed, mouth hung open, his hand pressed along his face. I always felt safe in those quiet moments. His loud snores would startle me into laughter; they also helped me sleep through the rougher nights, telling me that my father was close by.

My mother repeatedly chose to not be in my life—I’ve never learned why. This was the central heartbreak I experienced growing up. Her absence confused me. I often felt like I was a mistake or “bad” and had done something to make my mother not want me. I don’t have any positive memories of spending time with her. Nor do I remember the sound of her voice. I was born with white skin, red hair and intense blue eyes like hers, but the similarities end there.

In Grade 7, my father asked if I wanted to go live with her for a year so that I could learn “how to be a girl.” I was beyond happy; finally, my mother wanted me. I packed everything, even my cat Suea. I was given my own room and a little half-sister. Five days later, my father called. He was very upset with me, asking why I was misbehaving and running away. I cried in disbelief. Surely this was a mistake. I’d never been in trouble, let alone run away in a strange city.

My father immediately drove from Vancouver to Calgary to pick me up. Not knowing what I had done wrong, I climbed into the running brown truck and looked back to see my parents arguing. My father threw his hand in the air while my mother stood in the doorway. My father walked back towards the truck. My mother locked eyes with me. I sobbed. She shook her head in disgust and slammed her door shut. I slumped into the seat, feeling thrown to the ground like a dog being left on the side of the road.

I remember certain moments like this extremely clearly. Other moments are blank—entire years, even. Once I had returned from “learning how to be a girl,” in my pre-teen mind, it felt like my father didn’t want me; he was forced to take me back. This was evident, as he had moved in with a new woman who was pregnant. My mother had only wanted me for five days, then made me leave. I had no home, no friends.

This was the first time I considered suicide. At age 12. I lacked the skills to comprehend what was going on. Nor did I have anyone to look up to who looked like me: my father had brown skin, my stepmother was Asian and I was the only white person. I was so lost that I would lightly cut myself. Once, I wrapped my wrist with a tensor bandage to hide the superficial cuts. My school counsellor made me show her what I had done. She grabbed my wrist and said there was barely a cut there, that I was just seeking attention. I was overcome with shame for not having the guts to truly cut myself, but boy, was she bang on! I was silently screaming for help to deal with all the feelings in my body. And here was yet another white woman shaking her head in disgust and walking away.

As a teen, I had two sets of friends: the Indigenous kids and the white kids. Both groups skipped classes and smoked drugs, but my Indigenous friends were also violent. I’ve witnessed fights and even stabbings. We were all so angry about being abused and dominated in both our cultures and society in general. So we fought and got high on marijuana, sometimes alcohol. Had my father ever found out, I would have been in a lot of trouble.

I loved being high and drunk. When I was high, I could laugh with my friends, my feelings safely numb. Drinking alleviated my anxiety. I became this confident, funny, adventurous woman. I depended on substances because without them I was a broken little girl with serious anger issues. With my father, I behaved, but with others, I partied.

At 20, I married a very abusive man and fell deeper into substance use. I grew to 243 pounds. Again, I considered suicide. I didn’t know how to process or speak about my inner demons and began having panic attacks. I had multiple miscarriages. I saw my failed pregnancies as God’s way of saying that I was a mistake and shouldn’t have children. If I did, my mother’s blueprint was all I had. The more I thought of becoming a parent, the more I drank. I was tormented by flashbacks in which I was sexually assaulted by multiple male family members. I hated myself. I had no self-worth. I was the big mistake.

When I share parts of my story now, I physically feel the weight of my pain on my shoulders and chest. I’ve lived my life never expecting to survive into my next year. I always thought, I’ll be dead before 16, so who cares. Then, I’ll be dead before 20, so who cares. I’m now 39, and I’ve realized, after eight years of sobriety, that I’m beginning to care. About my next steps. About living in a stable home with a loving partner. Even about becoming a mother one day.
Getting to this point in my life has been anything but easy. However, I’m growing away from wondering, why me? Why did my mother leave? Why was I abused by those closest to me? Why can’t I have nice brown skin and long brown hair like my Métis aunties?

About 10 years ago, I was blessed to be accepted to a program called Vancouver Incest and Sexual Assault Centre (VISAC), where I received talk therapy, cognitive behavioural therapy (CBT) and eye movement desensitization and reprocessing (EMDR), which helped me overcome my panic attacks. I also learned how to speak of my personal history without reliving it. Getting help with the emotions locked deep inside my core showed me a new way to live. I began to understand that life isn’t happening to me; life is happening for me. My experiences have resulted in vast emotional intelligence, and I can share my story to help others who have locked themselves away.

I won’t lie. Feeling feelings sucks! I much prefer disassociating. But sometimes—just sometimes—good feelings can slide through a sliver of an opening produced when we reach out. Those good moments build upon one another and make life worth living…instead of simply surviving.

Lisa is a Métis female residing in BC. She has a bachelor’s degree in criminology and sociology and is currently employed as a 911 police call taker. Lisa intends to make a difference in the world through writing, photography and sharing her experiences