Child of the First Step

Finding safe, affordable housing while living with the challenge of mental illness 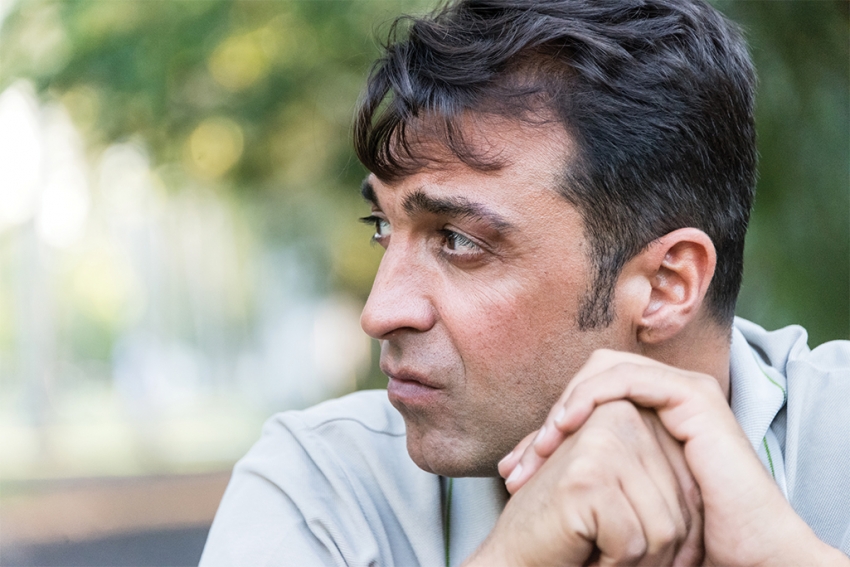 In my adult life—perhaps in the life of every adult—the first step towards independence was the procuring of food, shelter and clothing. Currently, these basic amenities are well within my reach, but in my not-so-distant past, there were days when I was nearly homeless. And as I am a very domestic person by nature—I guess you might say I'm a bit of a homebody—having an abode is very important to me. My home is a firm foundation on which I build the rest of my life's fundamental components.

Now, at the age of 40, living with a diagnosis of schizophrenia and temporal lobe epilepsy, I receive social assistance that helps to ensure that my basic needs are met. But let it be known that this was not always the case: I've spent time moving from commercial warehouses to illegal sublets to questionable places that accepted my under-the-table payments of rent.

I was born in Nelson, arriving in the world as the first-born son of a carpenter and a midwife. We lived in a small rented house on Granite Road, and then we moved to a shared property in a nearby valley where, at the tender age of five, I experienced what I understand in retrospect to be my first symptoms of mental illness. I heard voices that told me when I was going to die, as well as the name of my soulmate.

After my parents separated, we moved from the Kootenays to Vancouver. There, my father bought a house on the east side of the city, and my mother rented a place in a westside neighbourhood. My little brother and I went through elementary school and high school with all our basic needs provided for by our educated, middle-class family. Even though I experienced mild, periodic symptoms of paranoia in Grade 4, Grade 8 and Grade 11, I was a well-liked and functional child and adolescent as I took my first steps towards adulthood.

After I graduated, I was anticipating my big move from the metaphorical nest with a certain amount of dread. I had done well in school—I was gifted, though not without a significant amount of existential angst—and I decided to live in an old, unserviced log cabin on my father's property in the remote forests of the West Chilcotin because I was inspired to write epic poetry, alone with my muse. For money, I worked as a part-time carpenter's helper. Of all the places I've lived over the years, other than where I live currently, I suppose I was happiest living in that old cabin on that remote, rural ranch.

The next few years proved to be challenging, as I experienced mild psychosis frequently and battled with grandiose visions of my own importance in the world. In 1999, after going back and forth between country and city lifestyles, I arrived in Vancouver once again and moved into a non-residential Downtown Eastside space that had been turned into a temple—the house of a cult that had interested me for some time and of which I eventually became a member. I wanted to be immersed in the occult community, studying and teaching, both. I paid $200 a month for a small windowless room.

Then, I adopted the rural lifestyle once more and moved back to the ranch to continue my writing. There, as before, I had the whole house to myself, although I had no electricity or running water—but I did have a radio phone for emergencies. When I left the ranch again, primarily with the naive and ambitious hope of getting my many books published, I ended up sharing a house with my girlfriend back in BC's largest city, near Commercial Drive, in the spring of 2001.

While living there, I was paying $375 a month. But after using drugs— marijuana (cannabis) in particular—I got fired from my full-time job at a commercial art studio (where I was making tiles), most likely because of my disturbing behaviour (like claiming to be Mozart and dancing while I was working).

We ended up getting evicted because we couldn't pay the rent. My girlfriend then became pregnant, and I was mentally ill much of the time. Finding out that my girlfriend was pregnant was amazing, although I was rather young (22) to become a father.

Finally, after a long winter of anticipating fatherhood, viewed through the lens of chronic psychosis, I was working with my dad, building a house in Kamloops, when I was hospitalized due to a psychotic break. In the hospital, I was diagnosed with schizophrenia. In some ways, when I heard my diagnosis, it felt like a big relief—both to my family and to me. Two months after my diagnosis, when I was living without a real home, I was quickly becoming a father. Needless to say, there was a lot to adjust to. Eventually, my condition stabilized enough that I was discharged from the hospital in Kamloops. That summer, my psychiatrist insisted that I go on disability, which was really the only way for me to afford a place for my small family. My girlfriend, our son and I returned to Vancouver, where we paid $650 a month for a small attic suite on the west side of the city.

During the first two or three years of my son's life, I was hospitalized seven times. The side effects of my medication were unpleasant, so I would stop and start it, without physician supervision. I demonstrated dysfunctional behavioural patterns—I would carry a tape recorder around with me and record people's conversations, for example—and it was a challenge for anyone to be around me.

When our son turned one, my girlfriend and I spent the summer helping out on a ranch in one of the province's beautiful interior valleys. We then sublet a place on Salt Spring Island for a while, after which we repeatedly ended up living with friends and family members. Eventually we found a place on the Sunshine Coast for a whopping $800, which we struggled to afford. That was where not one but two police incidents occurred, in the spring of 2005. I became violent and was arrested.

After spending six long months in a maximum-security psychiatric institution due to my violent behaviour, I was discharged and sent to live with my mother near Granville Island, although I was ordered to stay a safe distance from my girlfriend and our son. I also tried living with my brother for a time. I struggled to maintain a healthy lifestyle as I got back on my feet.

After nearly six long years, in the fall of 2014, I received a phone call from my case worker and was offered a suite in a nearby mental health housing facility. There, paying only $375 a month and receiving supervision by caring medical professionals, I felt my spirit blossoming—and even found the time to write my memoir. The manager of the supported housing program conducted weekly meetings that I was required to attend, in the lounge common area of the building. My health improved—I was taking medication regularly and was even able to quit smoking, something I'd been doing off and on for years. I had very little stress, and much support. I graduated from the supported housing program in 2016.

Today, I am receiving a housing subsidy of $425 every month from MPA Society, which provides housing support in the Greater Vancouver area. This makes it possible for me to rent a one-bedroom apartment near Main and Broadway. Every two weeks, I meet with my Supported Independent Living (SIL) worker. We talk over coffee, and she ensures that I am stable and healthy. My current living situation, on subsidy, is really good; my apartment is central, there is an abundance of local cafés and my case worker offers me support and advice and a sense of safety.

I am also very much involved in my son's life. Now 16, he is and will remain the light of my life. I'm very proud of both him and his mom, with whom I remain good friends. I haven't been hospitalized in over 13 years. Now, having finally taken that all-important first step towards an optimal quality of life, I'm not just stable and healthy: I'm thriving.