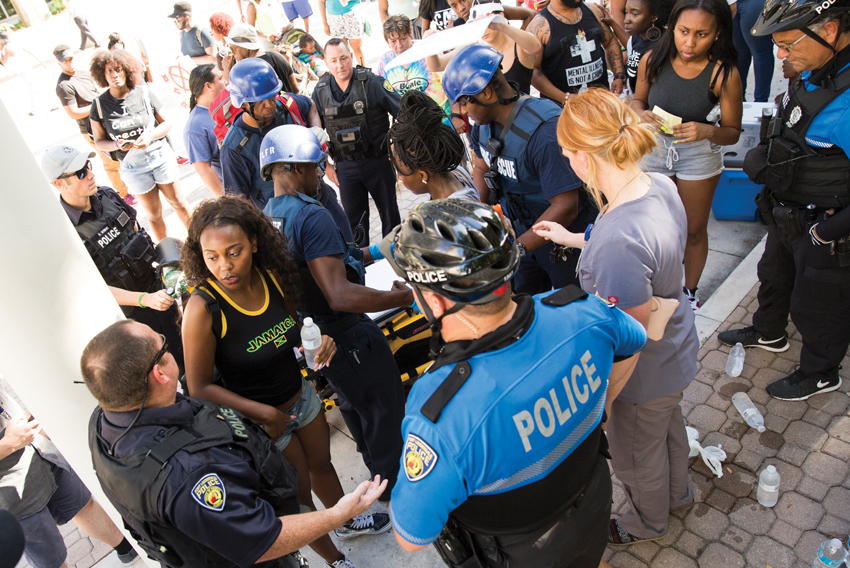 In recent months, activists and racialized communities have continued to shine a light on ongoing racial discrimination and unacceptable use of force by police against BIPOC community members.

The role of state institutions and white supremacy in reinforcing inequities and harming well-being has been front of mind for many in 2020. BIPOC communities have been working to bring attention to this issue for decades, but several recent high-profile deaths in North America have sparked a very public conversation about the role of police and the use of violence.

A focus of the conversation in Canada has been related to what are referred to as “mental wellness checks” (where police attend in response to a reported health concern that does not involve any criminal activity) and the role of armed police in responding to mental health needs, particularly the needs of BIPOC community members.

Although it is important to focus on the role, misconduct and accountability of police in this context, it is also important to recognize that BIPOC experiences of systemic racism as related to mental health are not limited to interactions with the police.1 Systemic racism is present in many institutions that impact the lives and well-being of members of BIPOC communities every day, particularly those who need, or who are believed to need, mental health supports. The overlapping experiences of BIPOC as they interact with various institutions create ongoing harm and inequity.

To understand the impact of racism within institutions like the police and the health systems, we must realize that when a member of BIPOC communities comes into contact with those systems, they have already experienced the health inequity caused by racism in our society more generally.

Racism and white supremacy create systemic barriers and discrimination in employment, income, health care, housing, education and other crucial necessities that can negatively impact health and well-being and lead to life-long and intergenerational inequities.2 As a result of racism, racialized people are at an increased likelihood of experiencing a mental health difficulty. Indigenous peoples and communities in Canada experience higher rates of mental health challenges as a result of complex intergenerational trauma caused by decades of colonialism, oppression and discrimination, which continue to this day.3

In addition, the ongoing and cumulative impacts of racism often create trauma, whether it’s in the form of a “big life event,” like a discriminatory firing, or continuous, unrelenting microaggressions (everyday subtle interactions or behaviours that communicate some sort of bias towards BIPOC individuals).4

Currently, when someone experiences a mental health crisis or reports that another person may be in crisis, the system often relies on armed police to respond. When police are involved, the intersection of institutional racism and policing can have catastrophic impacts on BIPOC communities.

There are too many very recent examples in Canada where police responded to a BIPOC community member with potential health issues by using force—often with fatal results. Chantel Moore died on June 4, 2020, when she was shot by Edmundston police during a so-called wellness check.5 D’Andre Campbell was shot by Peel Regional Police in April 2020 after calling the police himself to request mental health services.6 Kyaw Naing Din was shot by the RCMP in Maple Ridge during a mental health crisis in August 2019.7

According to provincial statistics, the reality of police-related deaths is stark: Indigenous people and those experiencing a mental health crisis disproportionately die in police interactions. Two-thirds of all people killed by police use of force in BC between 2013 and 2017 were experiencing mental health symptoms when they died.8 Investigations by Canadian news organizations have found that Black and Indigenous people are over-represented in incidents of police use of deadly force.9, 10

When BIPOC community members are able to access mental health services, either via police or through a safer route, they encounter a system that often fails to recognize or acknowledge systemic racism as a cause of health issues and trauma. By focusing on individualized causes and treatment, our services fail to address root causes or validate experiences of oppression. Instead, as one of the authors has pointed out before, “the mental health system frequently ‘mirrors systemic discrimination' by not acknowledging how racism and other oppressions affect racialized people.”2 For example, a recent report on Indigenous-specific racism in BC’s health care system found that Indigenous people were often stereotyped as less worthy of care, more non-compliant and less capable than non-Indigenous people.11

BIPOC with mental health issues often experience barriers when it comes to accessing culturally appropriate treatment. They are also more likely to be admitted involuntarily to treatment facilities and are more likely to be diagnosed with psychosis than non-BIPOC. BIPOC experience within the mental health care system also includes increased use of seclusion, restraint and emergency medication.12 Various countries have documented that BIPOC community members are more likely to experience coercive, involuntary mental health treatment against their wishes.13 British Columbia, along with most other Canadian provinces and territories, does not track data on the race and ethnicity of those subject to coercive health care, making it impossible for us to bring systemic patterns to light, let alone address them.

If we want to support mental wellness, we must combat racism and white supremacy

All institutions, services and individuals make choices every day about whether they will reinforce or dismantle systemic racism. Even after the public focus on police violence and mental health has shifted, the harmful impacts on BIPOC communities will remain for a long time. If we want to eliminate mental health inequities and support BIPOC individuals to have an equal right to their best mental health, taking action to dismantle racism must be part of the conversation.

Dr. Dhand is an associate professor in the Faculty of Law at Thompson Rivers University, teaching in the areas of health law, mental health law, human rights law and community lawyering. Ruby has also worked as a human rights lawyer, specializing in disability law, and she is on the board of directors of Health Justice

Kendra is a lawyer whose career has been dedicated to using her legal skills to create positive social change. She is especially interested in the intersections of health equity, human rights and the social determinants of health. She is the Executive Director of Health Justice. You can learn more about Health Justice at healthjustice.ca