NOT part of the job 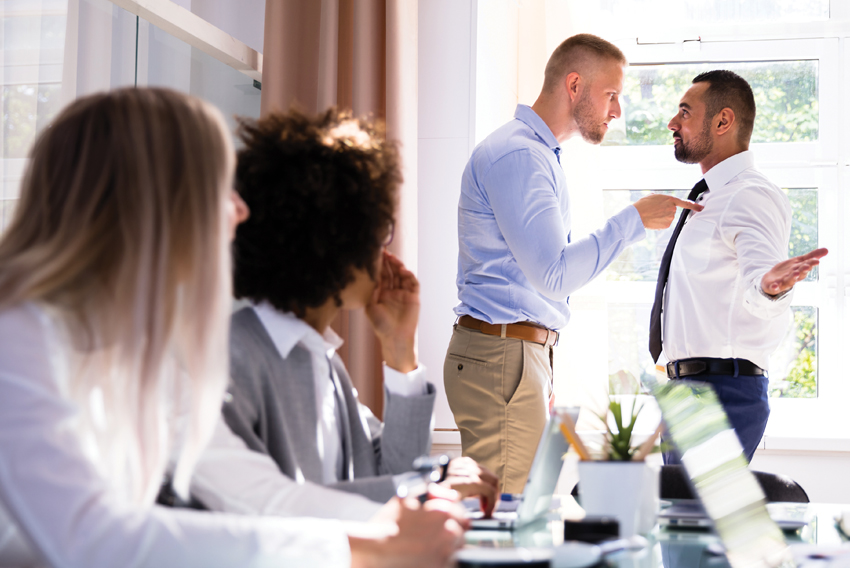 From time to time, we all experience challenging situations with someone at work: we disagree strongly, we are told that what we did was not up to snuff, we have to do work that we don’t like, we sometimes work with a person we don’t like or have little in common with. These can be challenging yet we can manage, and work gets done.

Bullying goes way beyond these situations. Bullying is repeated and persistent hostility that is directed by one person at another and that is harmful. If it is not addressed, it creates a hostile work environment.1,2

If there is more than one bully, we call it mobbing (ganging up). Bullying can be done face to face or through email and social media (cyberbullying).3 Bullying focuses on undermining and diminishing the other person through intimidating, demeaning, humiliating or isolating behaviour that never lets up. The behaviours may be subtle (ignoring someone, talking behind another’s back, withholding needed information) or overt (calling someone a derogatory name, interrupting them constantly, or damaging their work).

Bullying often begins with slights that are hard to identify as deliberate.4 People question themselves as to whether they are overreacting to the everyday “little hurts” of people being together. However, bullying progresses over time with more frequent and severe behaviour.5 It is in the pattern and progression of behaviour that bullying is revealed.1,2 The relentless nature of these behaviours wears a person down, undermining their ability to cope.

The size and scope of the problem

In any 12-month period, approximately 10% of people identify as being bullied at work.2 When we ask people about their experiences with bullying in their entire working experience over time, the numbers triple to 30%.6 Approximately 30% of workers say they have witnessed co-workers being bullied. If we consider these statistics together, over half of Canadians will have some exposure to bullying during their working careers. This means that, in a labour force of 18.8 million workers in 2018, approximately 11 million workers have had some experience with workplace bullying.7 The odds are that someone you work with, or even you, have experienced bullying or witnessed bullying firsthand.

Who does what to whom

Bullying is most often “top down” (a boss or supervisor is the bully) or peer-to-peer (your co-worker is a bully).2 The target of the bully’s attentions is often “different” in some way, and that difference is viewed by the bully as a threat to them and their view of “how things should be.”

For example, women, people of racial or ethnic minorities, LGBTQA2S+ and people with disabilities report higher rates of bullying. Sometimes people are bullied because they are very good at their job. The bully may feel threatened by this success and attempt—by bullying—to diminish the other. Sometimes a person is bullied because they are seen as an “easy target,” perhaps shy and quiet and thus unlikely to fight back. Or the bully’s target may be someone who persistently questions decisions or is “grumpy”; bullying them is “justified” because they are annoying. At its essence, bullying is a way of asserting control and power.2

From one to many: Ripple effects

Everyone is hurt when bullying occurs:2 the person targeted, those who love and support them, the co-workers who see it happening, the work unit and the company. The person targeted will show signs of physical stress such as headaches, sickness or sleeplessness and psychological stress and strain such as anxiety, depression and, in longstanding, severe cases, post-traumatic stress disorder (PTSD). Sometimes, victims become angry and hostile and may become violent.

When someone is bullied, they often go over and over the experience in their mind, becoming distracted and worried. As a result, the quality of their work suffers, which affects everyone in the unit, as co-workers have to pick up the slack. Victims will often tell others about their experiences, most frequently family and friends. While the person receives support, family and friends experience distress watching a loved one suffer and not being able to change the situation, which in turn can make social and family life strained and difficult.

Often, in an effort to manage their stress, victims turn to alcohol and other substances,8 further affecting their work and disrupting their relationships with others at work and at home. Those who witness the mistreatment of their co-workers show similar effects, often becoming fearful that they will be the bully’s next target, and their own work suffers. Sometimes they direct their fear towards the victim, blaming them for the disruption and stress. Thus, while bullying may start as one person mistreating another, its effects can spiral, pulling in others, and the workplace becomes increasingly hostile and toxic. People leave, people suffer in silence, people do poor work, people lash out, people sue, units fail. When bullying is present, everyone—including the employer—pays the price.

What’s the company got to do with it?

Company culture can enable or support bullying.9 For example, bullying is more likely to occur in highly competitive work environments, where resources are tight, or status is based on accomplishment. These environments pit workers against each other. Being aggressive is viewed as a means of survival and of getting ahead. Work environments that have no policies about workplace conduct, or that do not enforce the policies they have, create situations in which there are no consequences for bad behaviour. The message is that bullying is “just part of the job” and “if you can’t stand the heat, get out of the kitchen.”

Let me be clear: Bullying is not part of the job. Bullying is a sign of a dysfunctional workplace.

Given the human and organizational costs of bullying, it is critical that bullying not be allowed to take hold. Policies are important as formal statements of who we are as a company, what constitutes constructive and safe work engagement and, thus, appropriate behaviour, and the cost of breaking the rules. Everyone needs to be educated about the policy and expectations of the organization. Further, policies must be implemented effectively and consistently in order to be taken seriously. WorkSafeBC has tools and resources for developing policies and training to support them.10

There are limits to policies. They rely on people reporting incidences of bullying, and reporting can be risky. Individuals may fear the bully’s retaliation or they may fear that the company will do nothing to stop the bullying behaviour.11 The fear of nothing being done is quite real. A 2018 survey by Forum Research found that only one of every three employers took action when bullying was reported.6

Further, to be “reportable,” conduct must exceed a “threshold” of severe and pervasive behaviour. This threshold is set by the company policy. Yet because bullying often starts out as “little hurts,” and a pattern becomes clear only over time—bullying may not be reported until the damage is already severe. What could be early warnings may be viewed as “not serious enough” to report. Yet these “not serious enough” incidences still hurt—and they may be the precursor to very damaging behaviours. So, what else should be done?

The work community needs to respond. We know that bullying behaviours often have witnesses. These “bystanders” are in a position to offer immediate and longer-term care—and often do.11 Building people’s skills and confidence to “see something, say something, do something” is important to address bullying behaviours before they take hold.12

People need to know that when they do take action, the company will back them up. Thus, employers need to consistently communicate support and provide resources for employee action. More broadly, it is through our responses to both bad and good behaviours that we communicate what we want our workplaces to look like.13 If we believe that work and workplaces should be respectful and healthy, then it is everyone’s responsibility to create and maintain an inclusive, respectful and constructive work culture. Such cultures are antithetical to bullying. Such cultures are productive and creative. These companies and their employees thrive.

Bullying hurts everyone, inside and outside the workplace. But bullying can be prevented. Collaborative efforts by employers and employees to envision, support and manifest respectful workplaces are the key to creating cultures that do not allow the bully and bullying to flourish.

Loraleigh is a professor of communication and Distinguished Service Professor at Wayne State University in Detroit. Her research and consulting focus on understanding and addressing workplace bullying. She is interested in bystander efficacy to address negative work relationships and build constructive ones. For more on her work, visit
www.comm.wayne.edu/profile.php?id=103677