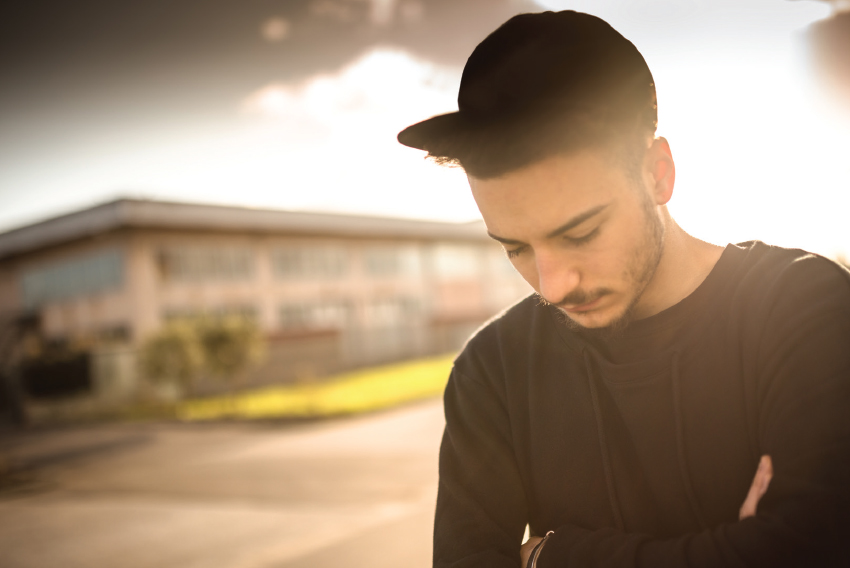 As early as I can remember, I always loved being "mistaken" for a boy. As a kid, I felt a certain giddiness before the perception was "corrected." Somewhere along the line, the thrill of being "misgendered" turned into a kind of sadness when the person was told that actually, no, I was a girl. My biggest wish in life was to just disappear, or to have somehow been born a boy.

It felt like a silly thing to wish for, but at the same time, somehow, I felt that if I'd been born a boy, I would feel better. This feeling of I-would-have-been-happier-if became more intense as I got older. I was depressed, I was anxious, and I felt worse and worse as I became a teenager.

Then, at some point in my early teens, I found out what "transgender" means. The concept made sense to me. I began to realize I was transgender.

When I worked up the courage, I told my mother first, and she immediately reassured me and was so grateful that I came to her for help. She helped let my father know, and he, too, was supportive, just as I knew in my heart he would be. After that, as I just did my best to keep myself going (I still struggled with depression and suicidal ideation), my mother set out to find help. She had trouble finding the right supports for me to start the transitioning process. Even though many service workers genuinely wanted to help, they didn't know what resources were available either. Getting an appointment with a specialist required a referral from a family doctor, which I didn’t have. My mother had no idea where to start looking for a practitioner who knew the transitioning process.

To learn more, we ended up crossing the border to attend a transgender conference in the United States. By the strangest stroke of luck, we met there a family doctor from our area who agreed to take me on as a patient. I got a referral to see a psychologist, who confirmed I had gender dysphoria. I then saw an amazing endocrinologist, who put in an urgent referral for psychiatric assessment for my depression and anxiety. I started hormones (for the transitioning process) and medication (for depression and anxiety). I got put on a waiting list for surgery. I came out to my high school counsellors, who accepted my name change and made accommodations in the school for me. Even when I came out to extended family, the overwhelming response was "Oh, that makes sense."

Throughout this entire experience, I consider myself extremely lucky. I wish everyone could have the kind of experience I had—and that it wasn't just "luck." I had supportive family, and I had someone help me with resources. Especially important was the support my mother gave me. I lived in an area that was accepting enough that I could transition, and I lived somewhere I could access services when we figured out how to access them. If I didn't have all that, I highly doubt I would have reached the point I am today.

I wanted to die before I knew my diagnosis, but I didn't want to hurt my family. Being constantly misgendered and referred to as "she" is a very strange experience that is difficult to put into words. Even before I knew anything about being transgender or the condition of gender dysphoria, something about constantly hearing my feminine name and being called "she" wore me down. I did not want to keep living thinking I always had to be female. I just had a very passive feeling of not wanting to be alive. I am not sure if I would have got to a point that I would have acted on my suicidal feelings, but the passive feeling of wanting to be dead is awful for the mood. Whenever I reflect on it, I know that if I'd received less help at that critical time, then I would have more seriously considered suicide instead of forcing myself to stay alive for everyone else.

Without support, the challenges are even greater

In my work in health care communications, and in my friendships with youth facing mental health challenges, I've seen again and again that the barriers to receiving mental health care are myriad and complex—and that if we simply treat the symptoms rather than looking at the big picture of a youth's life circumstances, we miss opportunities to provide support.

A lot of my friendships started online. For many of my online friends, depression and anxiety are common themes. Having gone through a challenging mental health care process myself—coming out as transgender and then transitioning—I have a really good view of the barriers that people face, barriers that I had the support to overcome. But none of my friends has been as lucky as me.

For example, one of my friends is regularly shamed by her parents about her fixations on various things and her lack of focus on others. Her family criticizes her for not being able to focus on what's "important." When she is depressed, her family tells her she is "lazy" and that she should just "get over" her anxieties. Even after a visit to the hospital emergency room for a huge panic attack in which her whole arm went completely numb and she couldn't breathe, she still didn't get further help and support from her parents.

She knew she had some form of anxiety and probably depression, and she wondered if her inability to focus on tasks was a symptom of ADHD. But she didn't feel comfortable approaching her family about needing medical help. She is from a strict family that always needed to know what she was doing—where and when and with whom. She felt like she had to "sneak out" to have a psychiatric appointment and even saved up her own money for counselling sessions.

Once she got the medical help she needed, she felt relief that she wasn't just making excuses and she found healthier ways to cope, but she's never felt she could tell her parents. The stigma of mental illness and her parents' outright refusal to consider her mental health care made it hard for my friend to get any sort of treatment until her mid-20s.

Knowing firsthand how hard it is dealing with even one challenge, it breaks my heart to see another best friend of mine dealing with multiple compounding factors. After years of being referred to as "she" by family and others, he finally put his foot down and insisted on being referred to in a way that respected who he is as an individual. Since doing so, however, he's faced many challenges. Family members whom he thought were supportive have now withdrawn their support or have provided their support conditionally. For example, when he wanted to wear gender-appropriate clothing, including something to compress his chest to appear more masculine, his mother refused to take him to see his great aunt, with whom he is close. His mother also retracted her initial offer to help him move his belongings during an unexpected home move—one that was already placing a difficult financial burden on him.

His mental and physical health have since deteriorated, and he's had to miss so much work that even part-time employment is a struggle. Late welfare checks and other unexpected financial hardships sometimes force him to choose between medication and food. His gender dysphoria and current unstable housing situation are exacerbating his depression and causing him increased anxiety.

He feels like he's in a horrible, never-ending cycle, getting to a slightly better place only to fall back to the bottom. Even though he wants so desperately to live a happy, healthy life, and reaches out for support again and again, the guilt he feels when he falls back down only makes him feel worse. He has called the suicide help line multiple times, but feels talked down to; he's been to the hospital emergency room repeatedly but doesn't have the money to always get his meds or find proper follow-up. And although he's been treated for some of his symptoms, the treatment he's received hasn't addressed the root cause of his mental illness. And it's hard to explain to people why he has attempted suicide when he's so afraid to die.

I know that what would make a big difference for him (and for many of us) is for someone to see the whole situation—the whole personal health care landscape. Not just one symptom. Not just one challenge. Not just one diagnosis. One whole person and experience—the big picture of what is stopping someone from getting the help they need.

Family support is the best first step to getting over barriers to good mental health care. But it's important to keep in mind that family looks different to different people. Not everyone is lucky enough to find the love and support they need in their immediate family. When our immediate families are not able to provide us with what we need, we can turn elsewhere. Related or found family—relatives, friends, counsellors, online communities, colleagues, classmates, faith groups and other social relationships—can give us the strength, love, support and resources we need to access care.

Ryan is from the Lower Mainland of British Columbia. Besides his own experience and hearing about his friends' struggles, he has also seen the barriers that impact people’s everyday care at his work within the hospital system