Walking a Liberated Path Towards Anti-Racism 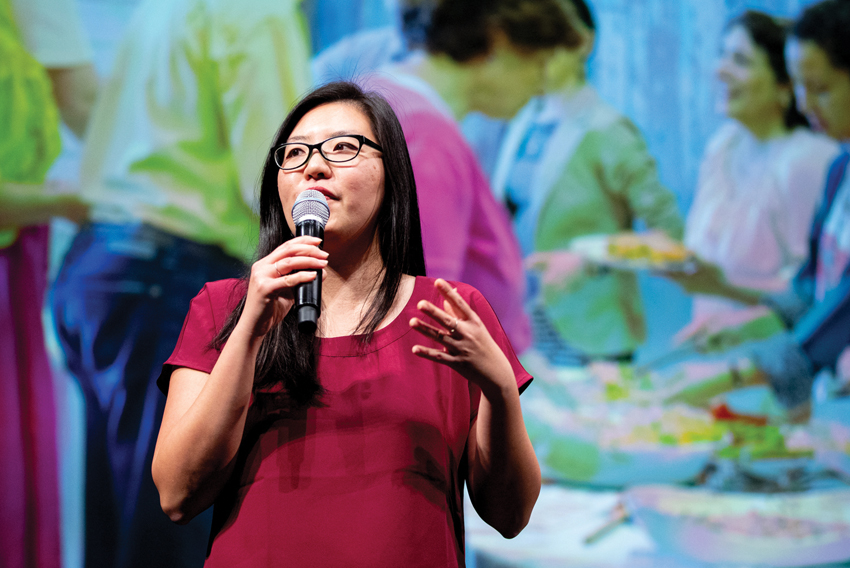 “The beauty of anti-racism is that you don’t have to pretend to be free of racism to be an anti-racist. Anti-racism is the commitment to fight racism wherever you find it, including in yourself. And it’s the only way forward.”
– Activist and writer Ijeoma Oluo (@ijeomaoluo)

My personal understanding of systemic racism and the impact of racial trauma revealed itself when I experienced a racist assault in Vancouver in May 2020, during the COVID-19 pandemic.

The incident was not my first experience of racism in Canada. I was born in Taiwan and moved to Canada in Grade 7; I am now in my mid-30s. Even though I feel very Canadian, I’ve often experienced what I think of as micro-aggressions—subtle, implicit biases, stereotypes and assumptions made about a racialized or marginalized group. For example, I’ve had people pass me on the street and pretend to speak Chinese. Once I went to a micro-brewery with a friend and a white guy came up to me and (assuming I was Japanese?) began making comments about Japanese people.

But my experience in May was my first traumatizing experience of misogynistic, racism-fuelled aggression. I was walking home from picking up some food while—ironically—listening to an American podcast on the rise of anti-Asian racism during the pandemic, when a white man came toward me and made sexual and racial comments before then spitting on my face.

That moment changed everything for me.

Even more ironically, the podcast was about “model minority” behaviour—how Asian Americans often keep quiet in the face of systemic racism, perhaps believing that speaking out will draw negative attention to themselves. The podcast speakers were pointing out that by being silent, the model minority actually supports the perpetuation of unacceptable racialized behaviours. We need to break our silence in order to confront and end racism.

On the sidewalk, in that moment, I felt a wave of emotions—rage, disgust, pain, sadness. I was also in shock. I immediately called a friend, and the friend encouraged me to report the incident to the police.

I didn’t think twice about it. I didn’t doubt the police would take me seriously. I felt that their job is to protect the public and investigate when a crime happens, so it’s important to report. In hindsight, I know that many persons of colour have different perceptions of the police. As an Asian Canadian, I go to the police because I feel it’s safe to. But if you’re Black or Indigenous, and you or your family have experienced racialized aggression by the police (or if you have witnessed that sort of aggression in the media), your first instinct may not be to report.

But in the days and weeks following the incident, I knew that, as a person of colour, I had a responsibility to take action. I had to break the silence that serves only to protect the aggressor and allow fear, apathy and ignorance to fester among the wider population.

I spoke out publicly, sharing my story with several media outlets. I received a raft of emails and Facebook messages—from friends, acquaintances and even complete strangers. Typically, people were horrified and thanked me for sharing my story. Others (including white men) wrote to say they were shocked that something like this could happen in Canada. Many Asian Canadians shared that they’d experienced similarly racist aggression. It helped to know I wasn’t alone, but it’s hard to hear that some Asians are afraid to go out—not because of COVID-19 but because they might be attacked. It’s not even an irrational fear.

My experiences of racism and racialization are different from the experiences of Black and Indigenous people in Canada. But my voice—and the collective voice of other Asian Canadians—is important in the conversation about systemic racism. Erna Kim Hackett, a Korean American writer, speaker and racial justice advocate, calls on us to “slash the model minority myth to bits with our refusal to stay silent and our unflinching resistance to white supremacy.”1 As Asian Canadians, we must challenge the ways we have been affected by systems that deem Asians to be (essentially) law-abiding, non-violent, non-aggressive, non-threatening people of colour. We must ask ourselves, Who really benefits in that power-and-privilege hierarchy? Is it to our advantage to never speak out against racial injustice when we see it?

When Asian immigrants come to Canada, we tell ourselves to contribute, to not confront, to not speak out, to work hard and keep our heads down. These are common themes among the immigrant Asian community in the Lower Mainland and across Canada. But my family struggled to create connections within the immigrant community. I assimilated into many white spaces in my school, my work, my place of worship. You could even say that, given the model minority myth, and compared to Black and Indigenous folk, as an Asian Canadian, I have the closest proximity to whiteness.
But my experience in May of this year, and the rise of anti-Asian racism everywhere during COVID-19, is a reminder that our belonging and acceptance in this country is conditional on social circumstances and racial perceptions that are largely beyond our control. Historical and present racism reminds Asian Canadians that we are not part of the dominant white culture, even though we appear to have some of the same privilege and power as white Canadians.

One of the things I can do as an Asian Canadian is reclaim my Taiwanese identity, traditions and history, and actively recognize and hold the tension between Asian culture and the predominantly white culture that I also occupy. I will speak out against racism and oppression and be a co-conspirator in solidarity for justice and liberation with Black and Indigenous peoples.

As I have learned more about my own cultural heritage and identity, and the role I can play in white spaces, I have also learned about historical and institutional racism in health care, social services, housing, education, employment and criminal justice systems. My work with the Canadian Mental Health Association in Indigenous communities has given me a unique opportunity to learn about Indigenous history, culture and identity in Canada and how a history of racial trauma has impacted mental, emotional and physical health in those communities. My work with Immigrant Services Society of BC has opened my eyes to how immigrant and refugee youth and families often fall through the cracks in our social systems—everything from trying to find employment or social services to simply trying to book a mental health appointment is a challenge.

There can be no silent witnesses

As I reflect on the incident in May, one of the things that continues to disturb me is that there was a silent witness—an older Asian man on a bike who happened to pass by just as the assault was happening. He looked at me, but he didn’t say anything. I could tell from his facial expression that he was really angry or sad, but I think he was also afraid, particularly of the white man.

That kind of fear continues to feed into systemic racism. Our role as bystanders must be an active one, not a passive one. As people of colour, inevitably we will experience racism or witness it. It is important that, when that happens, we respond in an active and empowering way.

I can understand not wanting to confront the white man who assaulted me. But I would have liked the witness on the bike to have acknowledged me and my experience, to have asked me if I was okay. He could have connected with me. That connection would have made him an active witness. Part of witnessing is validating, acknowledging, recognizing the human being involved—saying, I saw this; how can I help? Being an active witness ensures that the focus stays on the human being who is the victim of the racial aggression.

In Healing Racial Trauma: The Road to Resilience, Sheila Wise Rowe talks about how racial trauma, caused by repeated direct or vicarious experience of racist incidents, can accumulate over time, leading to chronic stress.2 It’s no wonder that in a constant news cycle that features violent racist incidents and police brutality, many Black, Indigenous and People of Colour (BIPOC) are experiencing the mental and physical stress and weariness of fighting systemic oppression in their workplace, their community and public spaces.

The phrase “All my relations,” used frequently by Indigenous peoples, is an important reminder of the interconnected way of knowing and being that links together ancestors, future generations, communities and land. The words have resonance in the fight against systemic racism. They remind us that we are all related, and that how we value others has a direct impact on our communities and our relationships. As an immigrant and settler living in the traditional, ancestral and unceded territories of the Squamish, Musqueam and Tsleil-Waututh Nations, I am committed to learning from Indigenous leaders, Elders, land defenders and water protectors to bring healing and justice to the land and people. By understanding, honouring and practising holistic health and wellness at an individual and community level, we can heal past racial trauma and increase our resilience.

As I continue to process the incident in May, and to deepen my understanding of how systemic racism affects BIPOC across BC and Canada, I have also come to see that the act of resistance does not always have to be a fight.

We live in a society where the focus is always on doing. But by not doing—by simply being—we resist the Western practice of defining ourselves by what we do. The counter-narrative is to be who we are, our full selves. In this way, resistance can be meditating, going for walks, resting our body and mind, listening to meaningful podcasts, reading in the park. Resistance can be building friendships, sharing food and caring for our neighbours. Resistance is being our full, complex selves and showing up.

Trixie is passionate about creating intercultural spaces and opportunities to learn together and build relationships with refugee women, through celebrating food, culture and stories in her charitable social enterprise Flavours of Hope (flavoursofhope.com). She is learning, growing and leading with others to speak out for racial justice, equity and liberation